Please fill in below form to create an account with us 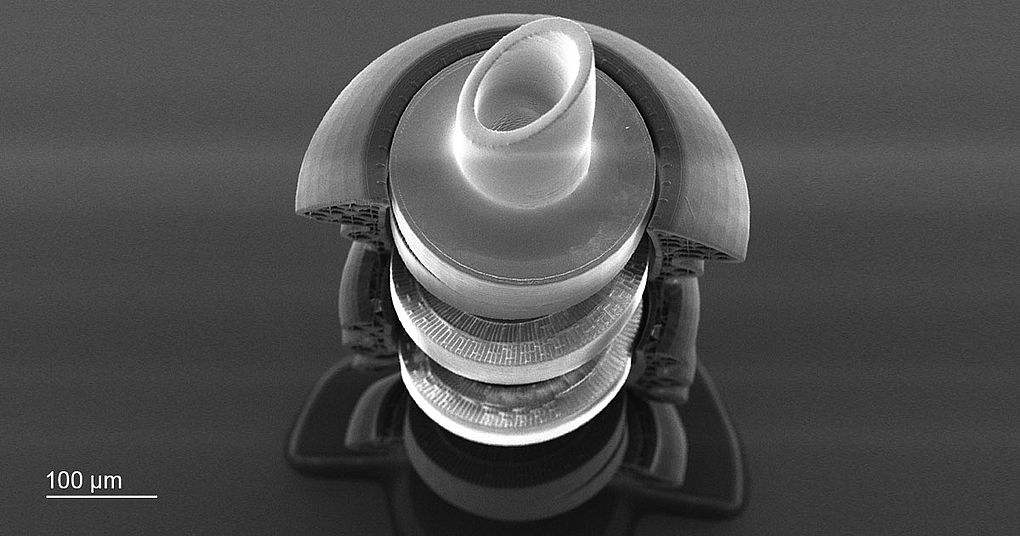 Scientists and engineers at the Fundación Markoptic in Culiacán, Mexico and the Universidad Nacional Autónoma de México (UNAM), Mexico City, have fabricated a novel device that could reduce the effects of glaucoma. They used Nanoscribe’s 3D printer to create a complex microvalve that is only 300 µm in diameter.

Glaucoma is the world’s second cause of irreversible blindness after cataracts. The World Health Organization estimates that 4.5 million people worldwide are blind due to glaucoma [1]. In some cases, glaucoma is a condition caused by increased pressure in the eye, damaging the optic nerve. This nerve transfers information from the retina, the light sensitive layer in the eye, to the brain. Over a long period of time, the damage of the optic nerve would gradually cause the loss of vision.

To tackle this condition, researchers from the Fundación Markoptic developed a microscopic device that could reduce the intraocular pressure and prevent the condition to develop into a more serious disability. For the fabrication of the device, they started a collaboration with the Laboratorio Nacional de Soluciones Biomiméticas para Diagnóstico y Terapia (LaNSBioDyT) at the UNAM that have the expertise and facilities for microfabrication.

The microvalve was conceived by the president of the Fundación Markoptic, Manuel Gallardo Inzunza. He suffered from glaucoma at birth and lost his sight 13 years ago, despite five corneal transplants. The design that he invented is inspired by an internal combustion engine of an airplane. The modified and miniaturized replica was developed to expel the aqueous humor from the eye, freeing the eye pressure. At the same time the microvalve uses a spring to control constant flow and intraocular pressure in a similar manner as the intake valve of a gasoline engine.

The device consists of three components: a valve structure with a liquid outlet, a flexible spring and the valve housing that holds the parts together. The valve is only 300 micrometers in diameter and very difficult to fabricate with traditional techniques at this scale. With the use of a Nanoscribe’s 3D printer, scientists were able to fabricate the microdevice with finest details. All parts were printed separately, matching the size and geometry requirements to assemble them into one functional component and perform as expected, in the correct pressure range.

The advances in the fabrication of this novel microdevice open the way to further investigations of the microvalve functionality and biocompatibility. Researchers work in parallel on the development of artificial cornea models that will simulate the properties of the eye by mimicking the pressure differences to test the microvalve and identify possible difficulties or side effects of the device.